I’ve been doing Latin dance for a while. More specifically, I’ve been doing Latin dance in Chicago for long enough to see certain patterns that exist in the nightclub, in the dance class, and on the performance stage. I suppose it’s only natural that things come and go like to seasons. Just when something seems to go out of fashion, someone comes along with a new twist and makes something old, new again.

While I’ve done my fair share of dips and tricks in performances throughout the years, I can’t say I’ve ever done them at the club during a social dance. There are so many reasons why it wouldn’t occur to me perform a lift or trick in a social setting. For example, the person might not be flexible. Or perhaps they simply don’t trust me. How about the possibility that my dance partner doesn’t know how to hold herself? That’s not even addressing the idea that I might hit some other couple on the floor with a lunge or low dip I perform. That could get ugly really quickly!

Truthfully, these are all good reasons that I’d like to explore further. Join me, ya?

Flexibility – Many times, a performer will wow an audience with their dynamic movement, speed and flexibility. You can imagine that a dancer like this would be capable of performing some nifty lifts. Undoubtedly, they have the flexibility to hit some beautiful dance lines and bends that would make teenage Jesus blush. But, how about those dancers who dance for fun? Is the social dancer someone who is training to do lifts and tricks? Yes, these are things you train. Not something someone can ‘lead you into.’ While that last comment might get some dirty looks from some teachers, I stand firm in my belief. Why do you ask? Simply because unless the person knows their part of the dip or trick, there is a chance they might not have the back or leg flexibility to execute the movement correctly. Unless you are a horse’s ass who is out to hurt people, this should be reason number one as to why you wouldn’t want to perform tricks on a social dance partner. Just…don’t.

Trust – Boy oh boy! I could write a small novel on this subject, but I’ll be a bit more brief. The establishment of trust is a real issue between dance partners. Casual dance friends can certainly learn each other’s tendencies, even fancy moves. That doesn’t mean we can spring a neck drop on them out of nowhere. I have several female dance friends who I share an awesome dance connection with and I wouldn’t dream to do something so inconsiderate. I would undoubtedly break their trust in me which is more important than a passing dip during a particular horn hit in a song. In order to properly execute a good lift and trick, both people have to know it’s coming and both dancers should feel confident in their partner’s ability. Without this base level of trust, people can and will get injured. Just…don’t.

The response you DON’T want after a dance.

Body Weight – Certain people know how to hold their bodies in such a way that they appear to weigh but an ounce. I remember one time taking a private lesson with World Champion Joanna Leunis (look her up) and she stood behind me and instructed me to grab her ribcage. Please note I Was in a lunge and in front of her, rotating my torso to get a semblance of a grip on her. I was taken aback by how lean she was while still being strong. I almost threw up when I noticed she was in relevé (rising up to her foot in pointe) and on one leg. I soon realized she knew how to hold herself so well that she could have done pretty much anything. Contrast this to your typical Salsera who is just having fun and there to dance socially. The club dancer has a different intention when they dance. She’s not looking to be in relevé and thrown around. She wants to groove with someone and dance. If you were to throw her up on one leg and death drop her, she would likely stab you in the eye with her pinky nail. Just…don’t.

Floorcraft – When I first started dancing socially, I was not aware to mind my own personal space. I wouldn’t be mindful to watch my partner and protect her from the other dancers on the floor. During those times, it was not uncommon for ol’ Del to catch an elbow in the gut or a glancing fingernail on my forehead. Nevermind the follows who trusted me to look out for them. They often left with bloody toes from being stepped on as well. It was also common for my dance partners at the time to catch random elbows in the face from other women who were styling. Just bad times in terms of public safety. This is the ugly part of social dancing that many people don’t discuss. If I could do it all over again, I would be more aware of my space and more careful to look after my partner. The issue of running into other couples is precisely why I’m such a huge proponent of dancing in a slot. Considering all the other things you should be thinking about, I would say lifts and tricks would be some of the last things you should consider when you’re dancing with another person in a nightclub setting. Just…don’t.

As usual, these ramblings of mine are stream-of-consciousness thoughts that I have related to a particular subject. Thankfully, I have a wealth of time invested in our community to have seen things that I can warn other people about. So, I would say that it’s best if you’re new to focus on becoming a better lead or follow and just focus on your dancing. Take those dance classes, try your best and keep at it, you’re sure to do fine.

In case you’re too lazy to read all these points, the key takeaway is to save the tricks for choreography and performances and focus on good dancing at the club.

Fellas, are you guilty of dipping women at clubs during your social dancing? If so, how has it gone?

Ladies, have you been dipped or had a trip that was crazy tried on you? How did you feel when it happened? Were you scared out of your mind? Are you okay?

As always, to your dancing…. 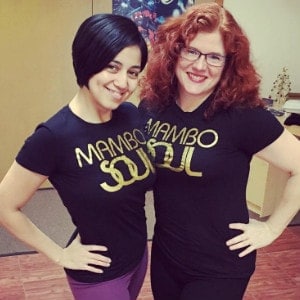 Ladies, wear the hottest Mambo shirt in the game,get yours now!